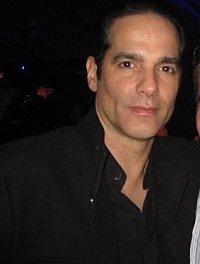 Yul Vazquez is the Cuban actor who plays Victor Lazaro on Magic City. He has been in three Seinfeld episodes, including the famous Soup Nazi episode, playing the character of Bob. He has also acted in many well-known movies, such as The A-Team, Che, American Gangster, and Runaway Bride. He has been married to actress Linda Larkin since 2002.

YUL VÁZQUEZ was recently seen on Broadway in the Tony nominated The Motherf**cker with the Hat opposite Chris Rock, Bobby Cannavale, Annabella Sciorra and Elizabeth Rodriguez. He received nominations for a Tony Award, Drama Desk and Outer Critics Circle Award for Outstanding Featured Actor in a Play for his portrayal of the eccentric Cousin Julio. Vázquez will next be seen in two upcoming feature films. The first is Salvation Boulevard (Mandalay) opposite Jennifer Connolly, Pierce Brosnan, Marisa Tomei and Greg Kinnear. Based on the book by Larry Beinhart, "Wag the Dog", the comedic thriller is set in the world of mega-churches in which a former Deadhead-turned-born again-Christian finds himself on the run from fundamentalist members of his church who will do anything to protect their larger-than-life pastor. The second is John Sayles‘ Amigo opposite Chris Cooper and Garret Dillahunt. This is the story of a village mayor caught in the murderous cross-fire of the Philippine-American War in 1900, and the near-impossible, potentially deadly decisions faced by civilians in an occupied country. Friendship and betrayal, romance and heart-breaking violence, this is a page torn from the forgotten history of imperialism and a mirror of today's irresolvable conflicts. Vázquez has appeared in over 30 films, working with directors such as Ridley Scott, Steven Soderbergh, and Steven Spielberg. Other film credits include The A-Team (FOX) opposite Bradley Cooper and Liam Neeson, Little Fockers (Universal) with Robert De Niro and Ben Stiller, Ridley Scott‘s American Gangster (Universal) alongside Russell Crowe and Denzel Washington (a 2008 SAG nominee for Outstanding Performance by a Cast in a Motion Picture), Steven Spielberg‘s War of the Worlds, (Dreamworks) opposite Tom Cruise, Bad Boys II (Columbia) opposite Martin Lawrence and Will Smith, Runaway Bride (Paramount) opposite Julia Roberts and Nick of Time (Paramount) opposite Johnny Depp. He reunited with director Steven Soderbergh to star opposite Benicio Del Toro in Che (IFC). Soderbergh first cast him in Traffic, for which he and his fellow cast members won the SAG Award for Outstanding Performance by a Cast in a Motion Picture. He has had numerous roles on some of television‘s most popular shows. From his re-occurring character Bob, the angry gay Puerto Rican, on Seinfeld, to one of Samantha‘s love interests on HBO‘s Sex and the City, to Rueben the Cuban on HBO‘s The Sopranos. Other television credits include Law & Order: SVU (NBC) and Fringe (FOX). Seamlessly moving between film, television and stage, Vázquez is co-artistic director and a founding member of the LAByrinth Theatre Company. Theater credits include The Last Days of Judas Iscariot (The Public Theater) opposite Sam Rockwell, directed by Phillip Seymour Hoffman, The Stendhal Syndrome (Primary Stages) with Isabella Rossellini and Richard Thomas, and The Floating Island Plays (Mark Taper Forum) to name a few.[1]

Retrieved from "https://magiccity.fandom.com/wiki/Yul_Vazquez?oldid=4069"
Community content is available under CC-BY-SA unless otherwise noted.