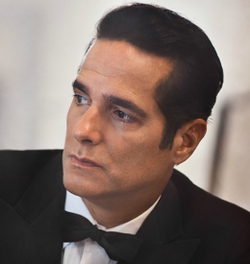 Victor Lazaro (Yul Vazquez) is the Cuban general manager of the Miramar Playa and one of Ike Evans' close friends and confidantes. His daughter is Mercedes Lazaro, a maid at the hotel. He is married to a woman named Maria, who gets trapped in Cuba after Fidel Castro takes over.

Victor Lazaro is the hard-working Cuban general manager of the Miramar Playa Hotel and Ike’s most trusted lieutenant. Victor and Ike came up together in the hotel business and, after so many years, are more like brothers than friends. A loving and protective father to daughter Mercedes, Victor’s world is ripped apart when his adored wife Maria is trapped in Cuba after Havana falls to Fidel Castro. In crisis Victor will discover a steel within himself and a surprising, shadowy new world.[1]

Yul Vazquez as Victor Lazaro
Add a photo to this gallery

Retrieved from "https://magiccity.fandom.com/wiki/Victor_Lazaro?oldid=5195"
Community content is available under CC-BY-SA unless otherwise noted.