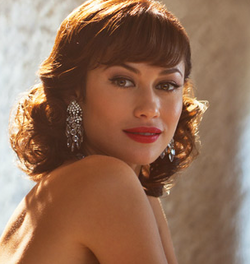 Vera Evans (Olga Kurylenko) is a former showgirl raised in depression-era Holland. She is the daughter of a Romany father and Dutch mother. She became a showgirl in Miami at the Tropicana nightclub under the name "Vera Cruz". She married Ike Evans two weeks after meeting him and became the stepmother of his three children. She faces resentment from his two grown sons and twelve-year-old daughter, especially since their mother, Molly, died of cancer six years prior.

Vera Evans is Ike's wife and the center of his life. A long-legged beauty born of a Romany Gypsy father and Dutch mother, Vera grew up living in the extreme deprivation of occupied Holland during World War II. After losing her family in the war, Vera boarded a ship with other orphans bound for the States that ended up docking in Cuba. Vera parlayed her childhood talent for dancing and heart-stopping looks into a career as the celebrated “Vera Cruz,” the star of Havana’s famed Tropicana nightclub. One night she locked eyes with Ike Evans from the stage and two weeks later found herself in Miami Beach, the stepmother to his three children, and the queen of the Miramar Playa Hotel. The transition hasn’t been easy, there is suspicion and distance from Ike's two grown sons and resentment from Ike's twelve year-old daughter. Vera is strong, soulful and a survivor. She loves her man and knows in her heart that he loves her too. Vera is determined to make a meaningful place for herself in Ike’s world and as a woman in 1959 America.[1]

"Six years ago, this was all just sand and mosquitoes. Now it's the Miramar Playa."
—Vera Evans

Olga Kurylenko as Vera Evans
Add a photo to this gallery

Retrieved from "https://magiccity.fandom.com/wiki/Vera_Evans?oldid=5131"
Community content is available under CC-BY-SA unless otherwise noted.