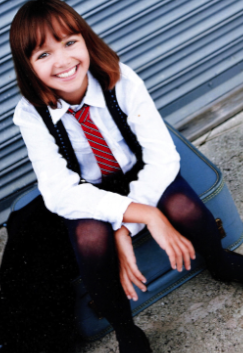 Taylor Blackwell, is the actress who plays 13 year old Lauren Evans on Magic City, the youngest child of main character Ike Evans (Jeffrey Dean Morgan). She was born on September 1, 1998, and is a rising star in film and television.

"She is the best child actor I've ever worked with. Better than any of them I've worked with in LA. She's amazing. Just amazing."
—Burt Reynolds[1]

TAYLOR BLACKWELL has been acting since she was five years old and has appeared in more than 35 commercials, ten films, numerous theatre productions and network TV programs. She has also done hundreds of national print campaigns, catalogs and voice over work. She won best actress awards for her role in Love Story at the G-Shorts Film Festival, and in Touched by Magic at the Lake Worth Film Festival. Born in West Palm Beach, she is currently an eighth grade theatre major at a performing arts middle school, and loves acting, singing, dancing and performing. In her spare time, she plays the piano, knits, swims, does arts and crafts, and plays with her many pets.She has two brothers and one sister. [2]

Retrieved from "https://magiccity.fandom.com/wiki/Taylor_Blackwell?oldid=5225"
Community content is available under CC-BY-SA unless otherwise noted.