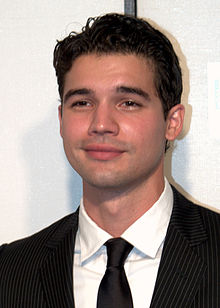 Steven Strait is the actor who plays Stevie Evans on Magic City. He was a model during his teen years, and later began taking acting classes at the Village Community School. In 2005, he starred in the superhero film, Sky High, as teenage superhero Warren Peace. He also starred in 10,000 BC and appeared in the film, Stop Loss. He is married to actress Lynn Collins.

STEVEN STRAIT is most known for his lead role in Roland Emmerich‘s 10,000 B.C. for Warner Bros. in which he played a young man from a primitive tribe that survives by hunting migrating mammoths. He also recently starred opposite Andy Garcia, Julianna Margulies and Emily Mortimer in the independent City Island, which won the Audience Award at the 2009 Tribeca Film Festival. Strait made his feature film debut in Disney‘s Sky High about a high school for Super Heroes in the sky. He played Warren Peace, the high school rebel who can shoot fire from his hands. The film also starred Kurt Russell and Kelly Preston. He was previously seen opposite Ashlee Simpson in the Lionsgate film Undiscovered where he played Luke Falcon, an aspiring rock star. The film was about a group of aspiring entertainers trying to establish careers for themselves in the city of Los Angeles. He also starred in The Covenant for Sony/Screen Gems. Strait worked on the New York Stage for seven years and has studied acting at the famed Stella Adler Acting Studio and the Black Nexus Acting Studio, among others. To finance tuition at his private high school, Strait worked as a model for such top photographers as Bruce Weber, Herb Ritts, Steven Klein, and Tony Duran while pursuing theatre roles. Born and raised in Greenwich Village, Strait was planning a move to Southern California to pursue film work, when he was cast in Sky High. While in Los Angeles with the sole objective of finding an apartment, Strait‘s agent insisted he go on just one audition. Sky High was Strait‘s first film role. Strait currently lives in New York.[1]

Retrieved from "https://magiccity.fandom.com/wiki/Steven_Strait?oldid=4068"
Community content is available under CC-BY-SA unless otherwise noted.