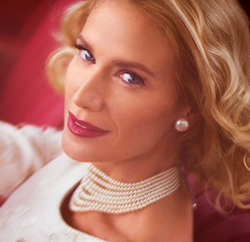 In season(s)
1
Portrayed by
Kelly Lynch

Meg Bannock (Kelly Lynch) is the sister of Ike Evans' deceased first wife, Molly. She is still close with Ike and serves as a source of funds which could buy him freedom from Ben Diamond. She is a sophisticated and intelligent woman who comes from old money.

Meg Bannock (Kelly Lynch) is Ike’s former sister-in-law, the older sister of his first wife Molly. A Grace Kelly cool blonde, Meg has the class and sophistication only old family money can buy. Twice divorced, Meg lives life on her own terms and has a business savvy that in a different era would’ve made her a mogul to be reckoned with. But in this life, she’s engaged in an increasingly complicated dance with Ike – as a constant reminder of his beloved first wife, a source of funds that could buy freedom from Ben Diamond, and a keeper of secrets that could destroy Ike’s close-knit family.[1]

Kelly Lynch as Meg Bannock
Add a photo to this gallery

Retrieved from "https://magiccity.fandom.com/wiki/Meg_Bannock?oldid=5194"
Community content is available under CC-BY-SA unless otherwise noted.