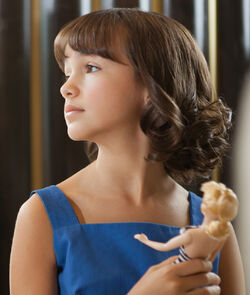 Lauren Evan (Taylor Blackwell) is the daughter of main character Ike Evans and his late wife Molly, the granddaughter of Arthur Evans, and the younger sister of Stevie and Danny Evans. As her late mother's sister, Meg Bannock is her aunt by blood, but it is unclear how close they are.

LAUREN EVANS is the youngest of Ike’s children with Molly and his only daughter. Just seven years old when her mother died, Lauren has only hazy memories of a time before Vera was married to her father, but that doesn’t mean their relationship is easy. Now 13, Lauren is moving into her teenage angst phase, lashing out at both Ike and Vera when she doesn’t get her way. A Collins Avenue princess who has grown up in the splendor of the Miramar Playa, Lauren most cherishes the love of her doting older brothers and her close relationship with grandfather Arthur.

Cast of Magic City
Add a photo to this gallery

Retrieved from "https://magiccity.fandom.com/wiki/Lauren_Evans?oldid=4490"
Community content is available under CC-BY-SA unless otherwise noted.