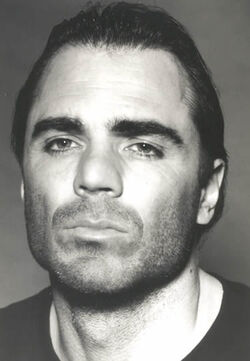 Full name
John Cenatiempo
Date of birth
March 5, 1963 (1963-03-05) (age 57)
Place of birth
New York City, New York, USA
Character
Vincent Lamb
In season(s)
1
IMDb Entry
John Cenatiempo, born March 5, 1963 (1963-03-05) (age 57) in New York City, New York, USA, is an actor and stunt co-ordinator. He has a recurring co-starring role in the first season as Vincent Lamb. He is known for his work as the stunt co-ordinator of the series Law & Order: Criminal Intent and as a stunt performer in the films The Good Shepherd (2006), American Gangster (2007), and The Bourne Ultimatum (2007). He has had recurring roles in The Sopranos as Anthony Maffei and Life on Mars as "Sizable" Ted.

Cenatiempo began his screen career as a stunt man in the 1980s. His first credited role was on the series The Equalizer in 1987. He also booked small acting parts, usually roles that required stunt work. He played Smitty in Lethal Weapon 3 (1992). His character was an armored car guard. He was buried alive when the film's antagonist, Jack Travis played by Stuart Wilson, had his men push him into a pit of wet cement.

He worked his way up to becoming a stunt coordinator, debuting on the series The Watcher in 1995. He played the mobster Jake Falcone in the 1998 television feature Witness to the Mob.

He had a recurring role in the crime drama The Sopranos as the mobster Anthony "Black" Maffei. He appeared in seven episodes from 2000 to 2007. He also worked on the show as a stunt man. He was the stunt coordinator for the long running CBS procedural Law & Order: Criminal Intent from 2001 to 2011.

He played the providence gangster Mark Brambilla in Martin Scorcese's film The Departed (2006). He was credited as Providence Gangster #2 but identified by name in dialogue. He appeared alongside fellow stunt man and actor Armen Garo in the film and their scene was a fight sequence with the film's star Leonardo DiCaprio in a store. His character was later tortured and murdered off screen. He did stunt work in the film The Good Shepherd (2006).

He played a bouncer in the film Brooklyn Rules (2007). The film was written by The Sopranos writer and producer Terence Winter. He did stunt work and had an uncredited role as a detective in the crim film American Gangster (2007). He did stunt work in the action film The Bourne Ultimatum (2007).

He had a recurring role in the science fiction drama Life on Mars during the 2008 to 2009 television season. He played "Sizable" Ted, a burly police officer in the same squad as the series leads. The series starred The Sopranos cast member Michael Imperioli.

He played Johnny C in the film Wrong Turn at Tahoe (2009). His character was stabbed in the stomach by the character played star Miguel Ferrer, after Miguel first shoots him in the stomach.

In 2011 he appeared in Boardwalk Empire as the New York mob enforcer Scarpelli. He co-starred in the second season episode "Ourselves Alone". His scenes included a fight sequence with the series star Michael Pitt which ended with the death of Scarpelli. The show was created by Winter.

In 2012 he joined the cast of Magic City as a recurring co-star for the first season. He played Vincent Lamb, the head of security for the Miramar Playa Hotel. The show reunited him with The Sopranos writer Lawrence Konner, who was a Co-Executive Producer for Magic City.

Retrieved from "https://magiccity.fandom.com/wiki/John_Cenatiempo?oldid=4729"
Community content is available under CC-BY-SA unless otherwise noted.