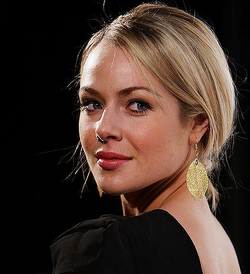 Jessica Dominique Marais is the actress who plays Lily Diamond on Magic City. She has previously guest starred in the television show Legend of the Seeker and the Australian drama, Packed to the Rafters.

JESSICA MARAIS is one of Australia's most exciting new talents. Prior to graduating from NIDA, Australia's most prestigious acting school, Jessica secured a leading role in Packed to The Rafters which became Australia's highest rated family drama series. Her role as Rachel Rafter on the show earned her the prestigious Gold Logie Nomination for 2011, two Logie Awards in 2009 and another five Logie nominations over the show's three seasons. Jessica's other credits include Two Fists One Heart and Needle, as well as the Disney series Legend of the Seeker. In early 2008, Jessica debuted with Sydney Theatre Company in the critically acclaimed production of A Season at Sarsaparilla.[1]

Retrieved from "https://magiccity.fandom.com/wiki/Jessica_Marais?oldid=4063"
Community content is available under CC-BY-SA unless otherwise noted.