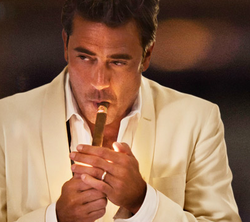 Name
Isaac "Ike" Evans
Occupation
Owner of the Miramar Playa Hotel
Birthplace
Birthdate
Age
Relationships
In season(s)
1
Portrayed by
Jeffrey Dean Morgan
Ike Evans (Jeffrey Dean Morgan) is the main character of Magic City. He is a shrewd and charismatic owner of the Miramar Playa Hotel. While he will go to great extents to make money, he is also focused on protecting his family, which includes two grown sons.

Ike Evans is the king of 1959 Miami Beach. Ike worked his way up from hotel cabana boy to building and owning the Miramar Playa Hotel, the most glamorous spot in America’s favorite playground. Creating his showplace has consumed Ike for years. Ike is a star, charismatic, and convincing but beneath his easy charm and gracious manner lie secrets, buried deep. Ambition, drive and vision go a long way toward making his dream real but Ike knows reality also requires cold hard cash. He has done, will do, whatever he must to keep his family safe and his dream intact... Ike is a good man who will make some bad choices for what he believes are the right reasons. The worst, most life-threatening choice was going into business with mob boss Ben "The Butcher" Diamond. Now, six years later, The Butcher is back in Miami Beach and looking for his pound of flesh. Ike’s first wife Molly shared Ike's dream of the Miramar Playa and her family wealth and connections, made much of it possible. Her death from cancer left Ike a widower with three children. Lost and reeling, Ike met gorgeous Tropicana showgirl Vera in Havana. Now Ike and Vera Evans are the movie star-perfect couple at the helm of the glorious Miramar Playa. Ike Evans, the good and glamorous king of 1959 Miami Beach, stands atop his palace built on sand.[1]

Ike is twice-married. His current wife is Vera Evans. He has two grown sons, Stevie Evans and Danny Evans, and a 12 year old daughter, Lauren Evans, from his first marriage. His late wife, Molly, who died of cancer, is the sister of Meg Bannock. He has no children with Vera.

Ike is the purported owner and manager of the prestigious Myamar Playa hotel, in Miami, Florida. He was actually funded by the organized crime figure Ben Diamond; Diamond is the Ike's main investor and demands a massive monthly payment of $65,000 from the hotel. Ike knows how precarious the relationship with the violent mobster makes his situation.

Ike and his sons also have a working friendship with Judi Silver. Meg Bannock is buying a portion of Ike's business.

Although Ike has partners in business, he is the only investor that actually manages the hotel; he is the soul of the Myamar Playa.

"Sounds like a hell of a lot of fun."
—Ike Evans

Retrieved from "https://magiccity.fandom.com/wiki/Ike_Evans?oldid=5268"
Community content is available under CC-BY-SA unless otherwise noted.