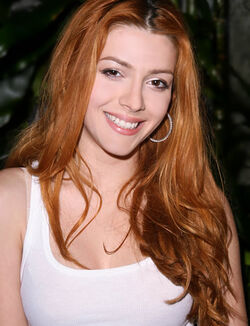 Elena Marié Satine is a Georgian actres and singer who plays Judi Silver on Magic City. She was born to Georgian aristocracy and trained in the piano during her childhood. By the age of nine, she had won numerous international awards for her classical music performances.

Since coming to the United States, Satine has acted in several television shows, such as Gemini Division, Cold Case and the CW's Melrose Place. She was in the 2011 movie, In Time.

ELENA SATINE was born in Tbilisi, Georgia (former USSR), into an artistic family and began her professional career at the tender age of five by appearing on a highly rated TV/Variety show for kids entitled "Morning Star." During a vacation to New York City, she auditioned for and was accepted to the prestigious Professional Performing Arts School. After appearing in "Midsummer Night's Dream," "Chicago" and off Broadway in "This is Our Youth," she moved to Los Angeles. Elena starred in Murder on the Orient Express for ITV in London opposite Jessica Chastain and David Suchet and acted opposite Adam Sandler in Just Go with It.[1]

Retrieved from "https://magiccity.fandom.com/wiki/Elena_Satine?oldid=5229"
Community content is available under CC-BY-SA unless otherwise noted.