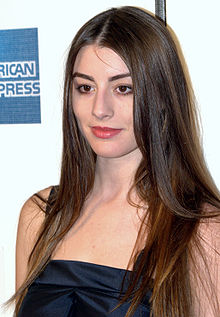 Dominik Cristina García-Lorido is the actress who plays Mercedes Lazaro on Magic City. Much like her character Mercedes Lazaro, she is of Cuban descent. Her first real acting job was in the 2005 film, Lost City. She is the daughter of actor Andy Garcia.

DOMINIK GARCIA-LORIDO has spent her life performing. She most recently starred in Magic City Memoirs, directed by Aaron J. Salgado. Garcia-Lorido made her film debut in the 1995 romantic comedy Steal Big Steal Little, which her father, Andy Garcia, also co-starred. In 2004, Garcia-Lorido returned to the big screen in the romantic-drama The Last Goodbye. Faye Dunaway and David Carradine also starred. She starred in The Chinamen‘s Chance and Kate‘s Smile and, also The Lost City, her father‘s directorial debut; in the film, Garcia-Lorido plays Mercedes Fellove, the abandoned wife of a Cuban revolutionary. Dominik‘s next role was as Vivian Rizzo in the feature film City Island alongside Julianna Marguiles and Alan Arkin. Garcia-Lorido trained at the Lee Strasberg Studio and Sanford Meisner Institute. She is a graduate of UCLA‘s prestigious School of Theatre, Film and Television.[1]

Retrieved from "https://magiccity.fandom.com/wiki/Dominik_Garcia-Lorido?oldid=4058"
Community content is available under CC-BY-SA unless otherwise noted.