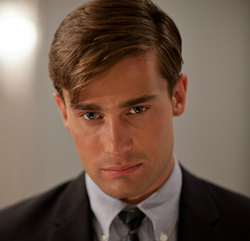 Danny Evans (Christian Cooke) is the younger son of Ike Evans. He is a morally conscious law student and aspiring politician with boyish good looks, who contrasts greatly with his older brother Stevie Evans. He has a close friendship since childhood with Mercedes Lazaro.

Danny Evans, Ike’s younger son, resembles his mother in both patrician good looks and sweet personality. A recent graduate of Tulane University, Danny has come home again to start his first year of law school at the University of Miami. Ever the diligent idealist, Danny will eagerly sign up to lead the charge into John F. Kennedy’s New Frontier. Returning to the Miramar Playa has not only brought Danny closer to his family but also led to a reunion with Mercedes Lazaro, daughter of hotel general manager Victor and a friend of Danny’s since childhood. When he’s not hitting the books, Danny can often be found keeping Mercedes company on her housekeeping rounds at the hotel, and trying to nudge their years of acquaintance into more romantic territory.[1]

Christian Cooke as Danny Evans
Add a photo to this gallery

Retrieved from "https://magiccity.fandom.com/wiki/Danny_Evans?oldid=5272"
Community content is available under CC-BY-SA unless otherwise noted.