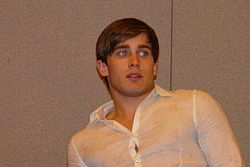 Christian Cooke is a British actor who plays Danny Evans on Magic City. He has since acted in British television such as Casualty, George Gently, The Royals and Doctors. He will play Mercutio in the 2012 film Romeo and Juliet.

CHRISTIAN COOKE was born in Leeds, West Yorkshire and is a young and prolific English actor with a long resume. Christian first took to acting at the age of 10, performing in various productions whilst at the Stage 84, School of Performing Arts. Throughout the next ten years, he worked continuously in television drama before landing his first lead role in ITV's Demons. Earlier this year, he played the lead role in acclaimed director Peter Kosminsky's, BAFTA nominated drama,The Promise. In film, Christian starred in Ricky Gervais and Stephen Merchant's '70s comedy Cemetery Junction, and for Bryn Higgins in the dark and twisted Unconditional.[1]

Retrieved from "https://magiccity.fandom.com/wiki/Christian_Cooke?oldid=4053"
Community content is available under CC-BY-SA unless otherwise noted.