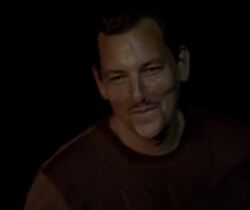 Name
Al Haas
Occupation
Organized crime enforcer
Bodyguard to Ben Diamond
Birthplace
Birthdate
Age
Relationships
Ben Diamond (employer)
Ike Evans (associate)
In season(s)
1
Portrayed by
Bradford Tatum
Al Haas, also known as "Dandy" Al Haas, is a recurring character in the first season. He is played by guest star Bradford Tatum and debuts in "The Year of the Fin". He is an enforcer in organization of crime boss Ben Diamond and usually serves as Diamond's bodyguard.

He is the long serving bodyguard of organized crime boss Ben Diamond.

He greets Ike when he arrives at Diamond's mansion for a meeting. He is part of a team of Diamond's men that forces union boss Mike Strauss to end a strike. They murder Strauss and dump his body in a flooded quarry.[1]

He is on Diamond's boat during the shark feeding frenzy in early 1959. He greets Ike when he arrives at the boat for a meeting with Diamond.[2]

He is involved in planning the murder of Judi Silver, which results in the death of Verna when she is covering for Judi. He uses a contact called Jimmy Shoes for the job.[3]

Retrieved from "https://magiccity.fandom.com/wiki/Al_Haas?oldid=4760"
Community content is available under CC-BY-SA unless otherwise noted.